Flu Vaccine Wool Over the Eyes 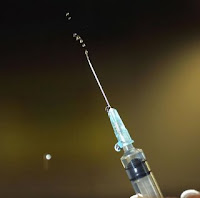 What do you do when you’re a pharmaceutical and vaccine manufacturer, and scientific data shows your product to be useless? You search hard for a rationalization and apply it to your MO in a stepped-up marketing campaign. That’s exactly what flu vaccine maker Sanofi Pasteur is doing right now.

You may remember a story I reported in an earlier post in which elderly people who were given the flu shot did not have a lowered risk of dying from the flu. Well, that study didn’t sit well with Sanofi Pasteur, so what was their recommendation? Give elderly people a massive dose of flu vaccine. Yeah, yeah, that’s the ticket. Give grandma four times the usual dose to boost her immunity (four times the standard is what Sanofi now recommends). Think about it: with that much attenuated virus in your system, you’ll no doubt have a measurably high immune response. No doubt. And as an added bonus you’ll quadrupel your profits. That’s called a win situation. Not win-win–just win…for Sanofi. 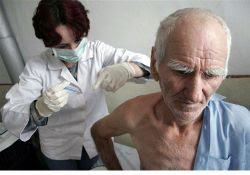 The reasons the flu vaccine works poorly remains the same: The influenza virus is a rapidly mutating organism. It’s virtually impossible to create a vaccine that will be right-on in any given year. They may get lucky sometimes–every gambler hits paydirt now and again–but there just isn’t now, nor will there ever be, an effective flu vaccine.

What makes this story especially frightening is that it’s simply another example of a greedy pharmaceutical corporation manipulating the truth for their own end. And this public health BS is being perpetuated by our medical and public health industries. The data is there; the flu vaccine doesn’t do much. Instead of making it the poster child of public health marketing, how about more studies? Not only studies done by the manufacturers of the drug itself (preliminary to FDA approval), but third party studies paid for by the manufacturer and regulated by a government agency too. You won’t hear me suggest government getting involved very often, but in this case, I think it’s crucial.