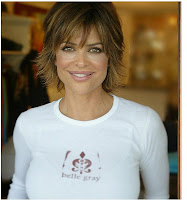 You’ve seen those luscious babies and wondered, “are they real?” But Lisa Rinna‘s lips are now a hot topic of conversation. The former Days of Our Lives siren and Dancing With the Stars grinder has come forth with a startling confession…she has had her lips enhanced. You don’t say. Yes, and she admits that she may have even gone too far. Whaddaya know? Cosmetic surgery secret revealed–now that’s progressive.

Well, Rinna is now cautioning her fans to think twice before getting the procedure themselves. Lip enhancement, or plumping, is done by injecting a “wrinkle filler” by the name of Juvéderm into the lips. Juvéderm is comprised of hyaluronic acid, a substance normally found in the skin, muscles, and tendons of mammals. Because hyaluronic acid is normally absorbed by the body within six to nine months, repeat injections are common. One could say…they’re addicting. Just ask Lisa Rinna. And like any addiction, the person hooked needs more and more as tolerance builds. And also like every other addiction, you just can’t hide it from the world.

There are dangers inherent in injectable fillers, too. For instance, they can lead to orofacial granulomas. Granulomas are a conglomeration of immune cells attacking a foreign substance but not quite able to dissolve it. They bunch-up in an area causing lumps and bumps. In the case of lip plumping, the consequence can be lip lumping.

I’ve never really understood the fascination with cosmetic facial surgery myself. I’ve always preferred natural beauty. Don’t get me wrong–I’ve seen some facial work which had definitely improved a person’s looks…but it’s rare. Most people who get it done look perfectly fine in their natural state; but their mind tells them they look unattractive. There’s probably nothing that can be said to these people; they’re minds are usually made up. But the results are often disastrous. Listen to Lisa Rinna: Think twice before getting addicted to Juvéderm.