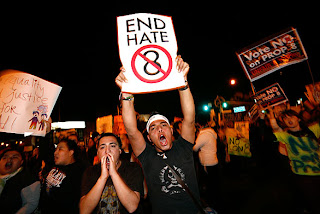 More than 1,000 people turned up for a rally against California’s ban on same-sex marriages in West Hollywood over the last several nights. Although the protests were relatively peaceful on Wednesday night–the night after the election–about 500 people broke off of the main group and tried to break a police line, with one protester jumping on a police car. According to police sources, several people were arrested.

Thursday night, however, was a different story. The protest at the Mormon Temple on Santa Monica Boulevard in Westwood turned ugly when protesters clashed with church members. Fists flew and one man’s nose was bloodied by an angry commuter. More than 2,000 marchers descended on the Mormon temple Thursday, calling for “No on 8!” 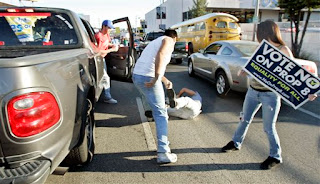 I can sympathize with the gay community as the chiropractic profession has seen its fair share of discrimination, too. In the 1960s the American Medical Association (AMA) created their Committee on Quackery whose sole purpose was to eliminate the profession of chiropractic. The AMA spent millions of dollars trying to discredit and destroy the chiropractic profession. Although the Committee was eventually uncovered, and the AMA ordered to cease their discriminatory tactics (Wilk vs. the AMA), the negative image of chiropractic perpetuated by organized medicine still lingers today. This is what the gay community is going through now, and will likely continue to struggle against for several more years…maybe decades.

This is a shame, as discrimination is hurtful to everyone, the discriminated against and society. Would society be improved by civil rights justice? Hell yeah! Just as society has been bettered by health care’s opening up to chiropractic–and ultimately all alternative health modalities (acupuncture, homeopathy, naturopathy, vitamin therapy, yoga therapy, and so forth).

So I say to all people protesting in West Hollywood (NO ON PROP. 8), this chiropractor is with you–my profession has been there, I understand. Get adjusted and keep fighting the good fight.

*More Prop. 8 protest information: There will be another rally at the Sunset Junction on Saturday night, and on Sunday at The St. John’s Episcopal Church at Figueroa and Adams (514 W Adams Blvd (EAST of Figueroa), 10:30am, on Sunday, November 9th, 2008).