What do you think—should courts decide how you care for your child’s health? Tough question, since the law is ultimately supposed to protect people, and children are often in need of such safeguarding. But how much is too much?

A Minnesota judge ruled yesterday that a 13-year-old cancer patient must be evaluated by a doctor to determine if the boy would benefit from restarting chemotherapy over his parents’ objections. The family belongs to a Native American spiritual organization called the Nemenhah Band, which believes in natural healing. The boy—who is considered a medicine man and an elder in the group–has been diagnosed with Hodgkin’s Lymphoma. Apparently he has made the decision himself to refuse chemotherapy (he only went through one session) and instead treat the cancer with nutritional supplements and other alternative therapies.

The treating oncologist, Dr. Bruce Bostrom, from Children’s Hospital and Clinics of Minnesota has stated that the boy’s tumor had shrunk after the sole chemotherapy session. Other doctors have said that the boy has a 90% survival rate if he continues with chemotherapy; but if he opts out, they say, he only has a five percent chance of survival.

The family, and the boy according to his legal team, want the right to choose whatever treatment option best suits them. But the court has ruled that the boy is unable to properly make that decision, stating that he has a learning disability* and can’t read. According to Judge John Rodenberg, the boy has only a “rudimentary understanding at best of the risks and benefits of chemotherapy. … he does not believe he is ill currently. The fact is that he is very ill currently.”

And so the judgment is that the boy must adhere to the doctors orders regarding chemotherapy, and if the parents refuse, the boy will be taken in protective custody. But it gets even more complicated. Check this out: If the boy refuses the chemo–hold onto your hats–doctors do not yet know how they will administer the drugs to him. Why don’t they just pin him down and inject it into him by force? Isn’t that the way to ensure compliance—gangstick ’em, Frances Farmer style?

Tsk, tsk, tsk…now if I haven’t heard it all. OK, first let me accede: these Nemenhah Band people are a bunch of nuts—no doubt about it. But who the hell is the government to step in and tell people what to do with their own bodies. Ok, ok…if the kid was absolutely clueless in all this, then maybe the parents are negligent and responsible for child abuse. But this kid knows what he wants. No, he doesn’t understand the full implications. Nonsense! He knows enough; and anyway, who the hell understands the full implications? Nobody has a complete handle on cancer; if they did, it wouldn’t be the new second leading cause of death worldwide.

Here’s the main problem with this ruling: At what point is governmental protection simply intrusion? Sure this is a tough case—as I’ve said, the family is teetering on the brink of lunacy. But ruling for court mandate in these complicated cases can far too easily lead to the same in other less complicated cases—like mandatory vaccinations, or worse, court-ordered psychiatric drugging of children, particularly those in “protective custody” (to get your bloodcurdling, read this frightening essay on state-prescribed medicating of children). 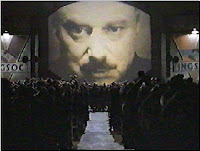 To what degree do we want our freedoms taken away, like the right to choose what each of us deems right for our family’s health and well being? It seems innocuous enough, this case in Minnesota—for sure it’s dealing with loonies right up there with Christian Scientists, those nut jobs refusing any medical treatment at all because of their belief that God will protect them. But this case is bigger, much bigger, because it’s deciding where Big Brother has the right to step in and dictate what we can and cannot do with regard to our families’ health. No vitamins—doctors say they aren’t necessary. Vaccinate your children or go to jail—like in Belgium. And absolutely, positively, without question you must take your pharmaceuticals because…well…doctor knows best. Just one question: What the hell are they going to do if that kid dies anyway? Doh!

*Learning disorder was a term coined by the psychiatry profession in 1963 to include children in the ever-growing envelope of mental disorders and to provide funds for disabled children in schools.