Whippets in L.A. I Adjust My Girls 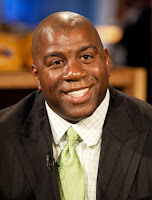 According to a recent report, Abbot Laboratories, makers of a new HIV drug have been using Laker’s legend, Earvin “Magic” Johnson, in their promotional DVD for the drug, Kaletra. The U.S Food and Drug Administration (FDA) has sent a warning letter to the pharmaceutical company ordering them to cease dissemination of what they label as “misleading information.”

The FDA states that the DVD provides only anecdotal information (personal account) on Magic Johnson’s personal experience with the drug, and offers no substantial evidence. They also go on to say that the DVD is misleading in that it presents Kaletra as “safer and more effective than has been demonstrated by substantial evidence or substantial clinical experience, and encourage use in circumstances other than those for which the drug has been shown to be safe and effective.”

Tsk, tsk, tsk…the folly of it all. Listen, drug companies know that the American public worships celebrity. So they know that attaching a big name to their product will increase sales substantially. Good job by the FDA for catching this bunkum. And damn Magic, stick to NBA analysis (awright, throw in a little Fatburger)–don’t go selling your soul, man. If that drug doesn’t turn out to be what Abbot Labs is claiming in their propaganda, or even worse, if it turns out bad, then you’re in the doghouse. Why bother? I know in today’s world, it must be the money (sung in my best Deion Sanders), but I’m certain that doing one’s due diligence on a product one is to endorse is the wisest approach.

Anyway, the DVD has been pulled, and Abbot Labs has been ordered to come up with a “comprehensive plan of action to disseminate truthful, non-misleading, and complete corrective messages about the issues discussed in this letter to the audiences that received the violative promotional materials.” And they’ve got only until July 28, 2009 to do it. I think they should get Larry Bird in on that one. What do you think?