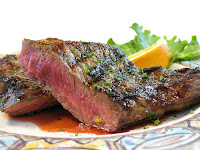 Health information is filled with myth: All people should curb salt, cholesterol is bad for you, and my favorite, eating meat is unhealthy. Oh sorry, red meat…whatever. And then comes science–you know, that objective observation of natural phenomena–to show us where we’ve been foolishly mistaken.

Take eating meat for example: A new study out of Japan showed that middle-aged people that eat meat at least twice weekly have a greater ability to care for themselves with such activities as independent feeding, dressing, bathing, and mobility. Check it: Over 2,300 Japanese men and women, aged 47-59, were observed for nearly twenty years. Of the more than 80% original participants still living, those that were regular meat eaters had significantly less risk for impaired physical function. The researchers did not find the same result for people eating fish or eggs at least once daily. Further, researchers found NO increased risk of dying from eating meat–none, nada, nunca.

All I can say to this is NO DUH! I know we all want to believe the conventional wisdom of the day, because well…it seems so logical; and dammit, it’s what we are told; and we wouldn’t be told what isn’t right, right? Wrong. When it comes to deciphering health information, a certain amount of logic is necessary. For instance, we have evolved as meat eaters–think about this hard Pythagoreans–how the hell is it going to be bad for us? I love what my good friend J.J. always says: Pointing to the sharp pointy teeth in his mouth, “See these; they are called canines; they are for meat eating.” No sh@*!

So now we have a study to show what most level-headed meat eaters already know–meat is not murder, it’s life; part of a magnificent cycle that keeps living organisms inhabiting this beautiful blue planet. The researchers of this current Japanese study believe that eating meat at the level reported in this study may help elderly better preserve muscle mass due to increased protein intake which, in turn, may play a role in elders’ ability to continue to perform daily activities. Let me repeat: No sh@*!

*Check out this great article on the dangers of NOT eating meat.