Got MRI? Get Surgery Darwinian Medicine

Very interesting information coming out of the swine flu watch today: More educated, higher earners are opting out of the H1N1 vaccine, while less educated, poorer folk are more likely to get the vaccine. Hmm, I wonder why.

According to a recent Thompson Reuters survey of more than 3000 people, almost 50% of people with lower education (nothing more than high school) were very concerned about H1N1, compared with only 29 percent of those with at least a four-year college degree. And 45% of the less-educated said they and their families were likely to vaccinate, while only 36 percent of college-educated people expected to be immunized. Almost half of all respondents said they were unlikely to immunize.

Well hallelujah! This news put my faith back into educated people–they actually do use their smarts sometimes. Let me repeat, hallelujah. I appreciate that so many people see right through this fear campaign being levied against us. The push for mass inoculations is absolutely ludicrous. And it’s not just individuals coming to their senses: Today the state of New York suspended its policy that all health workers are to be vaccinated against the H1N1 or risk discipline. Imagine the swine flu hysteria threatening our civil liberties. Geezus!

The hysteria is so widespread that our uber-progressive neighbors to the north are miffed and frustrated that Canadians are also rejecting the swine flu vaccine. According to a similar Canadian poll, Canucks will be avoiding the untried and untested H1N1 vaccine at about 50% themselves. Bravo Canada–you are progressive. 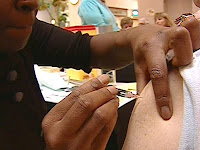 All this in the face of regular flu vaccinations being at their highest level ever at this time of year. Hmmm…you don’t say. My regular readers know that last year flu shots were at their lowest levels in the U.S. in years, and flu cases were also way down. Could the swine flu be a marketing maneuver? The ol’ bait and switch? Nah…just coincidence, I’m sure. Ha, ha, ha, ha…sometimes I wonder if I’m the only one who see the absurdity in health policy and practice.

According to experts, the swine flu has people contemplating the deadly dangers of the regular flu. Oy vey! Listen people: Most of us have already had the swine flu. I’ve been saying this for months. Listen! Stop freaking out! You’ve probably had it. I know I’ve have, and so has my daughter. If you were sicker this year than you can long remember–YOU PROBABLY HAD THE SWINE FLU. It has been confirmed by Centers of Disease Control Director Dr. Thomas Frieden: “Many millions” of Americans have had swine flu so far, he said. No kidding.

Flu is flu is flu, and what doesn’t kill you makes you stronger. Words to live by. Or you can freak out–it’s up to you.