Here’s a shout to the five chiropractic doctors serving on the 2010 U.S. Olympic Medical Team, one a former teacher of mine and standout sports chiropractor. BOOYAH!!!

Three of the five doctors of chiropractic are alumni of Southern California University of Health Sciences (SCU), Mike Reed, DC [my former instructor in the post-graduate chiropractic sports physician program (CCSP) at SCU], who is also serving as the team medical director, Eric St. Pierre, DC and Tetsuya Hasegawa, DC. The other two chiropractors are Dr. Josh Sandell, a chiropractor and certified athletic trainer from Maple Grove, Minn.; and Dr. Blase Soto, a chiropractor from East Brunswick, N.J.

Imagine that–a chiropractor as medical director of the 2010 U.S. Olympic team. Can I repeat: BOOYAH!!! Dr. Reed is Medical Director of the Sports Performance Division for the United States Olympic Committee at the Headquarters in Colorado Springs, CO. He has been teaching in the Post-Graduate Division of SCU [formerly Los Angeles Chiropractic college (LACC)] since 1984 and developed the Sports Medicine Residency program at SCU, where he served as its first Director.

Dr. St. Pierre is serving on the US Olympic Medical Staff for the short track speedskating team. Additionally, his duties include caring for athletes in the Olympic Village in Vancouver.

Dr. Hasegawa is serving on the US Olympic Medical Staff for the Bobsled and Skeleton teams and is providing care for the athletes housed in the Whistler Olympic Village.

Well, what can I say? I’m proud of my distinguished colleagues and my country’s Olympic Team. Making chiropractic an integral part of Winter Olympic training and health care is smart, sophisticated and cutting-edge. We certainly do lead the world in innovation, here–no doubt about it. And adopting chiropractic as a routine part of professional and world athletics proves it. No surprise that as of today the U.S. leads the medal count with 36*. Booyah! 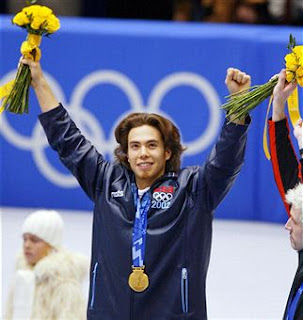