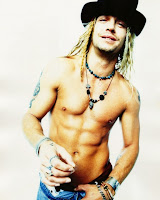 Former Poison frontman, Bret Michaels has been hospitalized with a brain (subarachnoid) hemorrhage; he was in critical condition, but is now stable. Michaels’ publicist reported to People magazine’s website that the 47-year-old rocker was hospitalized Thursday with a severe headache. Doctors discovered bleeding at the base of his brain stem.

Michaels was currently a contestant on the third season of Donald Trump’s NBC competitive reality show, “The Celebrity Apprentice.” Trump said in a statement today that he was “deeply saddened” to hear of Michaels’ condition.

Michaels had an emergency appendectomy last week at a private care facility for diabetics after complaining of stomach pains before he was scheduled to perform at Sea World in San Antonio, Texas. He later wrote on his website that though the surgery “has taken its toll,” doctors expected him to make a full recovery.

My thoughts and prayers go out to Bret Michaels and his loved ones. Hoping he makes a speedy and full recovery.