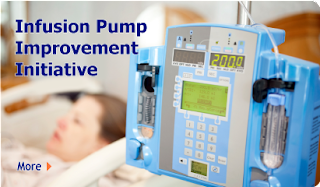 Here’s something to get freaked out about: The U.S. Food and Drug Administration has announced plans to step up oversight of infusion drug pumps, those commonly used medical devices that deliver fluids—liquid nutrients and medicines like insulin, morphine, chemotherapy or anesthesia—into a patient’s body. These devices are used in both hospitals and homes.Over the past five years, the FDA has received reports linking 710 deaths to infusion pumps and more than 56,000 reports of problems in total. Not good for the average trusting medical patient. The number of deaths is likely an underestimate according to officials at the FDA.

In the past, problems with the pump were attributed to human error–like a mistyping of info by a doctor or nurse. However, now FDA officials believe that software and design issues are actually at the root of many of them. Whoops!

This is a scary notion considering the widespread use of infusion pumps. The mother of my children had one hooked up during both child births. And to think, we are just now hearing of the dangers. I guess we are all human guinea pigs of sorts when it comes to advancing medicine. Pumps are also given to failed back surgery patients—yikes! Sorry, we can’t fix you–let’s pump drugs into you 24/7. Yeah, that’s my kind of health care.

The FDA is essentially asking manufacturers to provide more detailed design and engineering information to FDA for new pumps. The FDA also wants manufacturers to try out the devices in settings where they are commonly used, and when necessary, it wants to be able to inspect the manufacturing plant before approving the device.

In the meantime, take care of your health and stay out of the hospital–those places can be dangerous.