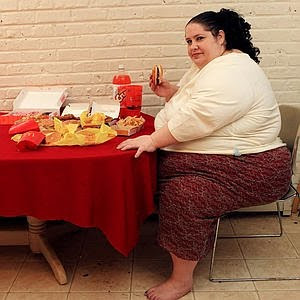 Here’s something you don’t hear everyday–a New Jersey woman vying to be fattest in the world.  You got it right–who cares about being phat when you can be fat?

According to recent reports, Donna Simpson, 42, of Old Bridge, New Jersey is seeking to be the largest woman in the world.  She does insist, however, that she’s not likely to reach her goals.

“I’d love to be 1,000 pounds,” she said. “It might be hard though. Running after my daughter keeps my weight down.”

Simpson admits that she’s a bit of an attention seeker, contacting Guinness World Record officials to be categorized as “biggest woman ever to give birth,” as she was 532 pounds when she gave birth to her daughter Jacqueline in 2007.

Although Guinness does not currently have that category available, they are thinking of creating it specifically for Simpson.  She’ll have a hard time getting into the records as fattest living woman as of now, though.  The biggest woman ever recorded was Rosalie Bradford, of Auburndale, Fla., who weighed 1,199 pounds in 1987.  The U.K. based Guinness outfit denies encouraging her to gain more weight, saying that it simply records freakish people and their undertakings. 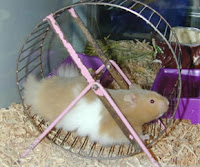 Here is why I love this story: It is no secret that I refrain from pushing the “you must lose weight” agenda.  My simple life philosophy is that you must either change the aspect of your life that no longer serves you or love it, plain and simple.  Far too many people strive for what society, or some other outside authority, tells them they must strive for; yet, it’s not really in their heart to do so.  These people then board the hamster wheel of life, running in circles trying so hard to fulfill their false desires.  Phucket!  Just love your weight and your food, like Ms. Donna Simpson does.  She’s got a man (“He’s a real belly man, she says, “and completely supports me.”), kids, and a website, where adoring fans pay to watch her eat.  Shoot, what the hell else is there?

Love who you are, live your dream, and let the world know about it.  Otherwise, change what you no longer value.  Just stop bitching about it while running your ass ragged on the freakin’ hamster wheel.

Visit msnbc.com for Breaking News, World News, and News about the Economy