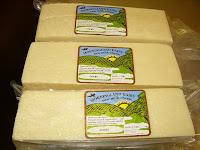 Just when you thought it was all safe–you threw out the eggs, you tossed the Wal-Mart sandwiches–here goes another Listeria warning: Listeria monocytogenes found in raw milk cheese produced in Missouri and sold in four California counties, including Los Angeles, according to the California Department of Food and Agriculture.

Listeriosis can be life threatening and is especially risky for pregnant women, newborns, the elderly, and immunocompromised people (HIV, cancer).  Symptoms of listeriosis include fever, muscle aches, and sometimes nausea or diarrhea. If infection spreads to the nervous system, meningitis can occur.

If you like raw cheese and Morningland is your brand, move it to the same location you did the eggs and sandwiches–in the garbage.