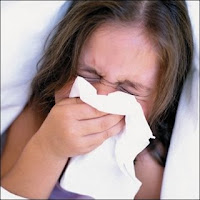 OK, OK…now that genetics is out as a cultural crutch for obesity, here goes something to quickly take its place.  Get this: Childhood obesity might be linked to the common cold virus.  Yes, yes, the common cold.  Not lifestyle behaviors, but a virus.  How’s that for quick thinking?

A recent study to be published in the September 20 issue of Pediatrics showed that some children infected by adenovirus 36 (AD36), which causes the common cold and slight gastrointestinal upset, were an average of 50 pounds heavier than children who hadn’t been infected by this particular strain.  The study, small and rife with coincidences, is the latest in “take-the-blame-off-the-patient” obesity hypotheses.

I repeat, this makes a study?  Now granted, the authors do not claim to have proof, but I laugh at the absurdity of the notion from the start.  Why not study the link between biting one’s fingernails and developing hemorrhoids?  Seriously.

OK, I get the rationale, but come on!  Whether or not a child has been infected with adenovirus does not remove the necessity to watch the diet and to be active, plain and simple.

But we musn’t blame people. Why the hell not?  Why perpetuate the ultimate problem: the lack of knowledge, understanding, discipline and responsibility?  Here’s why.  Hypotheses lead to further studies, connections lead to rationales, and rationales lead to drug and vaccine development–think anti-depressants.  New drugs for epidemics means a shipload of money.  The public gets a new wonder drug, doctors get more business, and government gets to look like it supports the public health by endorsing poppycock.

So the rest of us get a good five years of having to hear how people are fat because they’d at one time caught a cold; a particular cold; a fat cold.  And we get to pay even more for their health care, because it’s not their fault and everyone should be entitled to be an ignorant, irresponsible and undisciplined glutton.  We support you…literally.

Now before I get accused of being insensitive to obese people, remember, I’m the first to say be whatever you want to be.  I have nothing against obesity, ignorance, irresponsibility or a lack of discipline, because I know that everyone has these same characteristics somewhere in their lives.  In fact, I have said in this very blog and in my health articles that I am more an advocate for people loving who they are as they are, even if obese, as long as if they want to change, they take the responsibility to do so on their own.  No BS, no excuses, just take the leap and accept the glory and the blame.

But I do not support removing personal responsibility from one’s physical health and well-being; and I definitely do not support the use of so-called science to find further reason to move the blame away from the individual.  To answer one of the study’s authors, who thinks we should “move away from assigning blame, and broaden the way we think about obesity,” I say, it help much less to give people another crutch to simply rationalize reality: It takes hard work and a drastic change in lifestyle to lose weight and keep it off.  You’ve got to cut the sodas, work out, and keep the overeating in check.

Trying to pass off the notion that obesity is somehow caused by exposure to the common cold is irresponsible, and in my mind, an obvious attempt at creating the next blockbuster drug.  It’s a free market, yes–but will it change the world’s obesity profile?  Fat chance.