Blackout in a Can 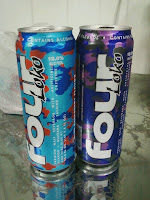 Oh yeaaahhhh…Four Lokos, beatches.  Ya heard?  Four Lokos is the stuff: alcohol and caffeine–a goofy combination.  And goofy is what you’ll be when you drink the Four Lokos.  23 ½-ounces of fruity malt liquor, 12% alcohol, liquid speed and sugar–woo-boy, boing!  Can’t say it better than the official Facebook page:

“you will remember absolutely nothing in the morning, probably acted like a slut, and possibly tried to fight someone. It’s a four loko thing…”

This is no joke…it’s Four Lokos, mang.  It’s like drinking four beers at a time.  Double fist it, brah!  Yeh boyeee…. 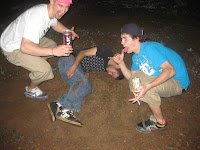 Nine Central Washington University freshmen were hospitalized after an Oct. 8th party, where when cops arrived they found “three girls sprawled on a bed, a barely conscious young man was being dragged out of the backyard, a girl was prostrate on the bathroom floor and three young people were splayed senseless in a car outside.”

Many CWU students couldn’t believe it either; they thought that, perhaps, roofies were involved.  They just couldn’t believe that this motley scene might be tied to the Four Lokos, which is also known as, the “blackout in a can.”  The students hospitalized had blood alcohol levels ranging from .123 to .35.  Doh!  Anything over .30 can lead to alcohol poisoning and death.  That’s right, G…don’t be a sissy, pound that twit.

But not everybody’s laughing.  A Washington, D.C.-based consumer advocacy group Center for Science in the Public Interest sued Anheuser-Busch and Miller Brewing Co., who eventually agreed to take their own “energy beverages” off the market.

As pointed out by the L.A. Times:

“That lawsuit cited a study by the Wake Forest University School of Medicine, which found that young drinkers of so-called alcospeed beverages were more likely to binge drink, become injured, ride with an intoxicated driver or be taken advantage of sexually than drinkers of conventional alcoholic drinks.” 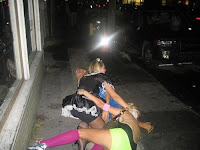 Although their aren’t any studies yet showing the effects of alcosopeed on the body, some believe the combination of alcohol and caffeine gives young drinkers a false sense of alertness, enticing them to drink more and more, leading to potentially dangerous blood alcohol levels.  The FDA will push for studies before setting out regulations on the alcospeed.

But don’t think for a second that Phusion Projects LLC of Chicago–manufacturers of Four Lokos–are not abhorred by the “irresponsible use” of their energy beverages.  Company officials said,

“The events in central Washington this month were inexcusable. And most would expect our company to disagree with recent decisions to ban our products from college campuses… We do not. We agree with the goals that underlie those sentiments,”

Aw mang, don’t pull my Four Lokos…pleeease!!!  How am I gonna git “F”ed up for two-fifty, mang?  Guess I’ll have to go back to robotripping. 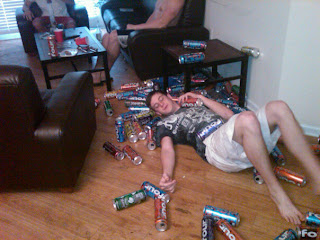