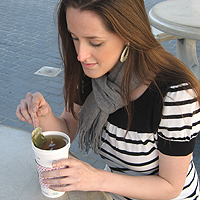 I know, we all want green tea to work for something; but when it comes to preventing breast cancer, green tea comes up short.  A recent Japanese study failed to show any protective effects against breast cancer from drinking green tea.

The study, conducted by the Epidemiology and Prevention Division at the Research Center for Cancer Prevention and Screening of the National Cancer Center in Tokyo, collected data on 53,793 women who were surveyed between 1995 and 1998.  As part of the survey, the women were asked how much green tea they drank.  A follow up survey was conducted at five years where they the women were asked the same questions but also which types of green tea were drunk (Sencha or Bancha/Genmaicha).

The survey results showed that 12% drank less than one cup of green tea per week, while 27% drank five or more cups a day.  There were also women who drank more than 10 cups per day.

They followed the women for almost fourteen years and found that 350 of them developed breast cancer in that time period.  But researchers found no less risk in women who drank green tea than in those who did not.

According to scientists, the strength in this study was its research design, particularly that green tea consumption was recorded before breast cancer was diagnosed, thus eliminating “the exposure recall bias inherent to case-control studies,” lead researcher Dr. Motoki Iwasaki said.

Still, some people want to hang on.  Like I said, we all really want green tea to be beneficial.  Case in point, Jennifer J. Hu, professor of epidemiology and public health at the University of Miami School of Medicine‘s Sylvester Comprehensive Cancer Center.  Says Hu, “just by drinking green tea you don’t get enough of the [possible cancer-fighting ingredient] to make much of a difference.”  She also states that population-based studies fail to localize single factors, as many more factors may play a part.

Yes, I can see Ms. Hu’s point.  Perhaps a study on freebasing green tea may produce the results she wants.  Let’s not all hold our breaths, though.