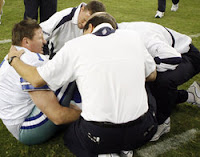 Hamstring pulls, strains and tears can be debilitating, and they are a common injuries in professional American football.  A recent study showed that more than half the hamstring injuries in the National Football League (NFL) were caused in the preseason, and not surprisingly, positions requiring the most sprinting activity were also the most often injured.

A ten year review (1989-1998) of injury data were prospectively collected by athletic trainers for every NFL team and recorded in the NFL’s Injury Surveillance System.  Over the ten years, 1716 hamstring strains were reported with more than half (51.3%) of hamstring strains occurred during the 7-week preseason.  The most commonly injured positions were the defensive secondary, accounting for 23.1% of the injuries; the wide receivers, accounting for 20.8%; and special teams, constituting 13.0% of the injuries in the study.

This study has a few implications: First, professional athletes that require significant sprinting in their sports–baseball outfielders, track and field, soccer, etc–would be wise to adopt a preliminary warming-up period even before the preseason (typically training camp) starts.  Perhaps a structured regimen over a period of one week where physical activity is started slowly, and combined with light stretching (yoga?), chiropractic and massage to decrease the amount of ‘colder’ full-on workouts that might precede the preseason. 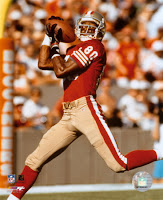 Second, the athletes themselves might want to take a half page or so from the off-season training book of NFL Hall of Fame receiver, Jerry Rice.  Rice was well known for his strenuous workouts between seasons, which likely kept him in the great shape that led to his playing in 189 consecutive games.  Now his regimen might be a little much for the average NFL player, but no doubt his dedication to his body kept him injury free–along with regular chiropractic care–for 12 years!  In the NFL?  Wow!

Finally, for the non-athlete or the weekend warrior–this study should show the importance of warming up before a run, a friendly softball game, or any other activity that includes sprinting of any sort.  Hamstring injuries are not fun–and they can be stubborn healers.  Be smart and warm up right, and hopefully you’ll avoid the unpleasant experience of the strained hamstring.

*Symptoms of a pulled hamstring: