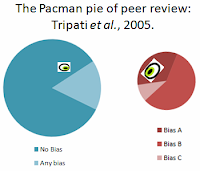 Another blow to the ‘genetics-is-the-answer-to-everything’ faction of medical science.  According to a recent study published in the Journal of the American Medical Association (JAMA), researchers often overstate the importance of biomarkers as links to disease, by citing papers that report the strongest associations, even when ensuing analyses downplay the connection.

The study looked at papers on biomarkers–biological characteristics, such as gene or protein activity, which can be used to monitor a person’s health–that had been cited more than 400 times.  These studies were then compared to others on the same biomarkers, and it was found that many papers were reporting stronger links between biomarkers and disease than were actually found in the majority of studies.  Even worse, many papers reported a stronger association than was observed in the largest single study of the same biomarker.

A 1991 study that was cited 1,436 times found that patients with a high level of a compound called homocysteine in their blood had a 27.7-fold elevated risk for vascular disease. But a meta-analysis reported only a 1.58-fold increased risk.

I love this because I know that there just is no such thing as true objectivity in science.  The fact that science is carried out by humans with beliefs and biases means that it will always veer in the direction of researchers’ own perspectives.  And that’s the way it should be!  Yes, we all want objectivity in science, but puh-leez–the universe (at least as it pertains to humans) is driven by our thought processes.  It is impossible not to affect observations, studies, or science as a whole by the human factor.

It takes a genius (Newton, Einstein, Watson/Crick) to drive a paradigm–the way in which we view the world.  The rest is up to the people of the era: WE direct science, art, politics, philanthropy, economics and education based on our own interpretations of the world.

So yes, there will be citation bias in science.  More reason to scrutinize the ‘genetics-is-the-answer-to-everything’ mind-set.  It ain’t.  In fact, my bias is that it merely plays a supportive role in most health/illness issues.  But that’s not our current paradigm, so I will gleefully chuckle at a distance every time some free-thinking scientists pick up on the current cultural biases at play during our attempts at objective observation.  Watch out climate researchers!