More bad news for junk food, as a recent study published in the journal Neurology shows that elderly people having higher levels of certain vitamins and omega 3 fatty acids in their blood score better on mental acuity tests than those who eat the junk.  Further, researchers found that eating better might even reduce the brain shrinkage associated with with Alzheimer’s disease. Booyah!

The study, conducted at Oregon State University, and one of the first of its kind, looked at 104 people at an average age of 87, and specifically measured a wide range of blood nutrient levels (instead of basing results on food questionnaires, which are less precise and less reliable). 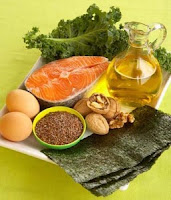 “The vitamins and nutrients you get from eating a wide range of fruits, vegetables and fish can be measured in blood biomarkers,” said Traber Maret Traber, a principal investigator at the Linus Pauling Institute and study co-author. “I’m a firm believer these nutrients have strong potential to protect your brain and make it work better.”
Yes, so am I! I’ve been preaching for years. Always happy to see the science back up a universal truth–whole, natural foods are healing and health enhancing. We’ve gone through millions of years of evolution feeding ourselves the foods of the earth–can’t think of any Doritos shortages that challenged mankind, can you?
The principle vitamins they found to help neurological health are some of my personal favs–vitamins B, C, D and E, as well as the omega 3 fatty acids–which increased mental quickness and brain size.
Elderly people that had diets high in unnatural and unhealthy foods, like those laden with trans-fats, fared worse on cognitive tests. Although the researchers found that age and education had major effects on cognitive function and brain size, nutrient status accounted for 17% of the variation in scores, and 37% of the differences in brain volume.

Well, what can I say other than…been tellin’ ya. Eat well–it’ll take you far. This study looked at people with typical American diets–some good, some…well, not so much. But it’s not too late to make the switch–in fact, perfect time for the new year.
I’ll leave it to study co-author Gene Bowman of the Oregon Health and Science University to conclude with, “It is very exciting to think that people could potentially stop their brains from shrinking and keep them sharp by adjusting their diet.” Indeed.
Copyright © 2013 Dr. Nick Campos - All Rights Reserved.