Smoking is dangerous! No, no, no…not cigarette smoking, electronic cigarette smoking. Reports of one such device blowing up in the face of a man taking a drag from it have come out of Florida.

According to fire officials, a 57-year-old Vietnam vet was toking on the electronic nicotine device when the battery exploded, shooting across the room and catching the contents of a closet on fire. The blast knocked all the man’s teeth out. Doh! 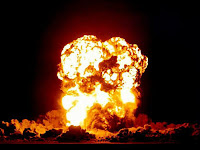 The man’s wife reports that she was in another part of the house when she heard a loud bang, which she described as sounding like a firecracker, and then a scream. In the aftermath, there was one man going to the burn clinic with a complete tooth demolition, loss of part of his tongue, and burns all over his face, a burned home office with everything in the room altered by the molten debris, including burned carpet, chair cushions, pictures and office equipment. Firefighters found a scorched battery case on a piece of melted carpet, which appears to be one for a cigar-sized device.

North Bay Fire Department spokesperson Joseph Miller said that the best analogy to what the man experienced would be like “trying to hold a bottle rocket in your mouth when it went off.” Um…don’t try this at home kids.

Apparently the man had been smoking the electronic cigarette for two years while trying to quit. These devices contain rechargeable lithium batteries designed to generate an electric charge when the device is inhaled. The charge sets off vapor in the cigarette tube. The nicotine-filled mist gives the taste and experience of smoking without the smoke. According to the Tobacco Vapor Electronic Cigarette Association, these devices are not recommended as a quit smoking aid but as a ‘healthier alternative’ to regular cigarettes, which they say contains more toxic chemicals. The industry says it knows of no previous reports of problems with the cigarettes or batteries exploding. 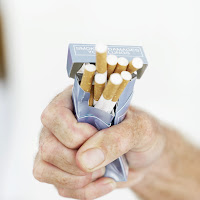 Well…what can I say? I guess all things come with their inherent risk. I know a few people that suck on these electronic nicotine dispensers, and I thought it was a stupid thing right off the bat. I’m all for  one kicking a habit–lord knows, I’ve done my fair share–but I’ve never been the ‘fake anything’ kinda guy. No alcohol-free beer, or decaffeinated coffee, or sugarless baked goods. For me it’s all or nothing. So I guess I feel that if you are going to smoke…then smoke, dammit. Not that I could have foreseen this, but…
Listen, consider the lengthy history of cigarette smoking as a science experiment, with the latest info on exploding electronic nicotine dispensing devices as the latest data. True, cigarette smoking increases certain health risks, but you’re fooling yourself if you think an electronic cigarette is going to lessen that risk (just like the claim some twenty-odd years ago that American Spirits brand was better for you because they used less chemicals…puh-leeze!). In fact, we now know that the risk actually increases.
So if you like your teeth…and your tongue…then just stick to the tried and true. And if you’re gonna quit…then just quit, for doggone’s sake.