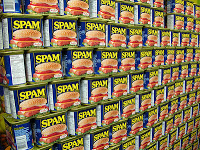 You’ve heard me say: eat at home. You’ve also heard me say: avoid canned, frozen and processed foods. And surely you’ve heard me say to shop on the outer edges of the supermarket, and avoid the aisles. Well here’s a study illustrating exactly why I preach what I do: Native Americans who regularly ate “spam” developed diabetes two times more than those who ate little or none.

The study published in the American Journal of Clinical Nutrition looked at 2,000 Native Americans from Arizona, Oklahoma and North and South Dakota to determine why this group had such a high rate of contracting diabetes. According to researchers, nearly half of all Native Americans develop diabetes by age 55.

Interestingly, spam (generic term for canned meat) seems to be a staple among many in this group. Because many Native Americans live in rural communities, they seek out food that has a long shelf life. Spam is actually subsidized by the government (I can’t make this stuff up).

The study group, whose average age was 35, was all diabetes-free at the beginning of the study. After the five years, researchers followed up and found that 243 of the people had developed diabetes; and they noticed that those who ate the most spam had the highest rate of developing the disease.

Although Spam is a brand-name commercial product, spam is any canned, processed meat. Canned meat is available freely to many Native Americans on reservations as part of the U.S. Department of Agriculture’s food assistance program. 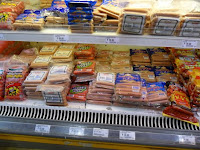 The lead author of the study, Amanda Fretts, said that unprocessed meats did not have the same type of connection to diabetes–that is, people were equally likely to develop diabetes regardless of how much fresh hamburger or cuts of pork or beef they ate.

Despite the data, a causational link between processed meats and diabetes cannot be made. The researchers admit they have no explanation as to why processed meats should cause diabetes. Although spam is higher in sodium, there is no known connection there.

The American Meat Institute, which represents companies that process meat, are sure there’s been some sort of mistake. They have responded to these study results claiming that “processed meats are a safe and nutritious part of a balanced diet.”

Well, I’ll leave it to you to decide–did researchers flub these results and see something that wasn’t really there, or does processed food have effects on physiology that we don’t fully understand? Hmmm…tough call.