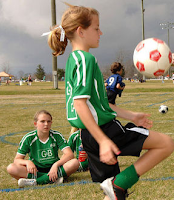 Listen up parents: Sports participation may keep your adolescent child from smoking.

Listen up parents: Sports participation may lead your  adolescent child to smoke…especially your daughter.

That’s right–both are conclusions of a recent study on peer influence conducted out of the University of Southern California. According to the research, middle-school children involved in organized sports were less likely to smoke than their peers. Nice. However, if their teammates smoked, then preteens were more likely to do the same, and the results were more pronounced among girls. Talk about smelling like team spirit.

Researchers questioned 1,260 sixth through eighth graders about their smoking behavior. The children were middle class, lived in urban areas and ethnically diverse.

The researchers concluded that peer leaders, especially in athletics, could help influence kids to avoid the stinky habit.

“Current guidelines recommend the use of peer leaders selected within the class to implement such programs,” said Kayo Fujimoto, the study leader. “The findings of this study suggest that peer-led interactive programs should be expanded to include sports teams as well.”

No doubt individuals of a group are going to influence one another–it’s called group cohesiveness. And no group more cohesive than the athletic team.

It really does make sense, then, to address health issues with both girls and boys as a team. If you can get through to one, you might just be getting through to all. But I am certain it’s best to start teaching ’em young, and to not be too obtrusive about it. Anything pushed too hard on the adult end is bound to stir curiosity. Listen, if my parents and teachers said it was bad, then it was good as far as I was concerned.

A better approach is to teach children about various health risks–like smoking, boozing, or sex (especially unprotected)–by just giving them the facts, without added emotion. This is smokers lung, girls; and this here is the result of a drunk driving accident; and over here we’ve got syphilis…and so on. Trust that kids will come to their own conclusions, and believe me, if a few on the team get it, then they probably all will.

Remember, there’s no I in team, dammit. So teaching the kids, especially peer groups, about healthy habits, without shoving it down their throats, will likely get through the best. Good work, team.