Got Gaydar? I do. At least I think I do. And here’s something…you might also. In fact, it looks like many of us have the ability to tell gay from straight; it’s an evolution thing. You’ll have to admit the neurological benefits to NOT having to think too hard about whether someone is a potential sex partner or not, right? I mean…it’s just biology.

Well, a recent study gives evidence that humans not only have a pretty good capability of telling another’s sexual orientation, but there may even be phenotypic markers that give it all away. Whoa! In other words, genetics may play an even bigger part than some of us have thought: How you look, and what you see, can get you laid…in the right way.

A study coming out of the University of Washington, Seattle sought to find out how we read faces to determine sexual orientation. Previous studies have shown that we possess the ability greater than what would be expected by sheer chance, so the UW team wanted to understand the mechanism. 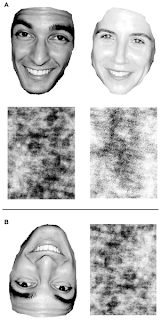 What we know: People can pick out with relatively high accuracy both men’s and women’s sexual orientation relying on no more than grossly impoverished facial photographs (i.e., grayscale, hair-removed) presented for as few as 40–50 ms.

To study this, researchers took profile pictures of self-reported hetero- and homosexual men and women off Facebook, and doctored them with Photoshop, removing hair and ears, and essentially just leaving the face. They then showed the photos to 129 college students, some right side up, and others upside down. Previous studies have shown that an above-chance accuracy exists for determining sexual orientation through individual facial cues, and these cues are accurately assessed when viewed either right side up or upside down. In men, for instance, cues around the eyes alone or mouth alone led to high sex orientation accuracy. 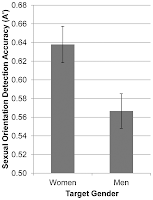 But for configural processing–which include a) ordinal spatial relationships among individual features (e.g., eyes appear above noses), b) cardinal spatial relationships among individual features (e.g., the amount of space between the eyes), or processing the face in a holistic or gestalt manner (i.e., the general shape of the face)–things get a bit tougher. While people are able to determine categorical features, like gender or race, from primarily individual cues, and thus whether the view is right side up or upside down, other identity-based features, like familiarity or celebrity, which rely more on configural cues, are lost when the image is viewed upside down (called the Thatcher effect). 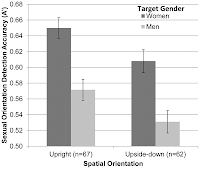 The researchers found that although participants were able to read men’s sex preference with above-chance accuracy, they were much better at reading women’s. And “false alarms” were less common in women, too–so with the gals, it appears…when we know, we know. But most surprisingly was that sexual orientation was picked out with above-chance accuracy in the upside down position, albeit not as precisely as when right-side up, thus the scientist concluded that both featural and configural processes are at work when assessing sexual orientation.