If you’ve been reading this blog, you know how I feel about getting sick–it’s absolutely essential. Protecting yourself against all illness is not only impossible, it’s dangerous. We need to get sick from time to time because encountering microorganisms upgrades our immune system in the same way updating your computer’s virus scan does: it protects you from future illnesses that might be strong enough to kill you. We evolve along with microorganism–and they with us. There’s no such thing as solitary evolution.

Case in point: Scientist have recently discovered the bacteria responsible for tuberculosis (TB) in 9,000 year old human bones submerged in waters off of Israel’s coast. It was previously thought that Mycobacterium tuberculosis was younger by about 3,000 years, but these findings show the incredible co-evolution of TB and man.

What I find interesting is that in our attempt to eradicate certain microorganisms, and thus certain diseases, we may actually be making said microorganisms stronger, tipping the balance in their favor for awhile. The widespread use of antibiotics and other drugs has led to the emergence of drug-resistant strains that are sturdier and tougher to treat. Take multi-drug resistant TB, or methicillin-resistant Staph aureus (MRSA), or now drug resistant HIV. We’ve created these superbug monsters, and are we more advantaged as a result?

I’m not suggesting that we shouldn’t take antibiotics, or HIV infected people shouldn’t take their drugs, but taking antibiotics for every sniffle or sore throat is absurd. Please let me inform you that sniffles and sore throats ARE good health! They are our bodies ways of fighting infection. 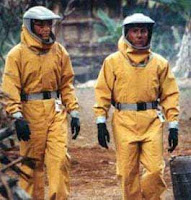 I bring this up because we are entering “flu season” and millions of people will be running for their flu shots, and millions more to their doctor for antibiotics because, “I’ve been congested for three days.” Just understand that on the one hand you are living an illusion to think that if you get a shot, you’ll avoid getting sick. You’ll get sick again, one day. And that you are actually getting protection from the flu (read last post)…you’re not. On the other hand, by running to the doctor for antibiotics to fight your viral infection, you are just adding to the probability of even stronger superbugs in the future.

Bugs evolve. Man evolves. We typically evolve together. Sometime man has the advantage, and sometimes microorganisms have the advantage. If I’m going to be the master of my health, I’ll take my chances and meet these little buggers head-on. Better believe that if I encounter something super-virulent, I’ll take the drugs. But not for the sniffles, I won’t. For that I’ll tough it out.