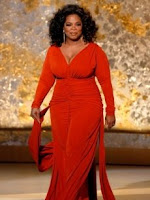 Oh Oprah, stop being so hard on yourself! Don’t beat yourself up for not being a waif. Waifdom is highly overrated–and not very healthy either.

According to her own words published in the January issue of O Magazine, Oprah Winfrey has ballooned up to 200 pounds. The 54-year-old television talk show personality says that she is “embarrassed” that she has “fallen off the wagon” of healthy living, and that a thyroid condition has led her to develop a “fear of working out”. She states she has put on 40 lbs. since being 160 in 2006, and that she is “mad” at herself for allowing this to happen. She says, “I look at my thinner self and think, `How did I let this happen again?'”

Chill out, Oprah! Yours is not a problem of the rind, but a problem of the mind. It’s not what you can and cannot do, it’s your self-perception that’s the problem. First, you are not of a thin body type. Body types are usually ectomorphic, mesomorphic, and endomorphic. Oprah, I think you are a endomorph. Endomorphs tend to be stocky with wider hips and a tendency to put on weight. These are the people who no matter what they try never get skinny. Notice I say, “never get skinny”, not “never lose weight,” because endomorphs can lose weight. But if these people succumb to the illusion that “thin is in,” then they are setting themselves up for a massive let down. That’s because endomorhs ain’t ever going to be thin–not for long, anyway. 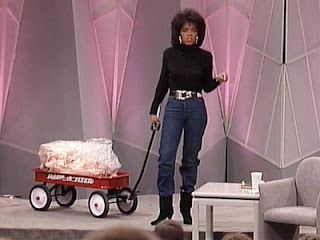 Second, Oprah, the weight you’ve actually lost has been done by faulty, and dangerous, methods. In 1988 you lost 67 lbs on a liquid protein diet. Special and crash diets don’t work, babe. Sorry. Eating well and working out is the only thing that works. But I feel grateful that the world has you, especially since your weight-battle is on display for everyone to see. You see, this should help many, many people–especially readers of this blog–because you are living proof of what I’m trying to push here, and in my book, The Six Keys To Optimal Health: Accept who you are with regard to your body type, eat well and exercise regularly. You’ll have no alternative but to approach the healthiest and most attractive shape and size for your body type. Swear.

Your weight has also yo-yoed over the years. Not healthy, babe. It’s much better to lose weight slowly and steadily than too quickly. One pound per week (on average) is healthy–nothing more. Then you did the Marine Corp marathon in ’94, and hired super-trainer Bob Greene to help you lose weight (hate to be him right now–even with the Oprah-effect in play). Good thing you didn’t jump on your old pal Dr. Phil’s weight loss program too. You’d probably be suing him as a result.

But never fear, Oprah, my dear–you look great livin’ large. Who the heck are you trying to impress, anyway? You haven’t lost any viewers because of your weight. I think you’re attractive, and I’m sure I’m not alone in that feeling. You are supposed to be above the cultural pressures that our teens, young women, and mature women all seem to be victims of these days; the one that says beauty is in thinness; I mean, you’re Oprah, dammit. Why would you be under that pressure. I’d think you’d be better leading our women out of that self-esteem quagmire than being a part of it.

Finally, you can still be as healthy as you can be, no matter what your weight, Oprah. Eat well, exercise, practice discipline, The Six Keys To Optimal Health, and don’t obsess about obesity. I feel that the obesity crucifixion is a lot more media and medical hype than anything else. It’s the new smoking, you know? True, taking a little off ain’t gonna hurt–it’ll help. But better to be fat and happy than thin and miserable, I always say. And I mean it.