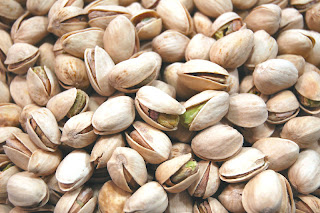 Salmonella Alert: The FDA has passed a warning to stay away from all foods containing pistachios. California-based Setton Farms, the nation’s second-largest pistachio processor, is voluntarily recalling all of its 2008 crop–more than 1 million pounds of nuts. All this on the heels of the recent peanut salmonella outbreak that has killed hundreds.

Although two people have called the FDA complaining of gastrointestinal illness that may be associated with the nuts, the link hasn’t yet been confirmed. Nevertheless, the Setton Farms plant has shut down as of last week.

The FDA learned of the problem last Tuesday, when Kraft Foods Inc. notified the agency that it had detected salmonella in roasted pistachios through routine testing. Kraft and the Georgia Nut Co. recalled their Back to Nature Nantucket Blend trail mix the next day.

By Friday, grocery operator Kroger Co. recalled one of its lines of bagged pistachios because of possible salmonella contamination, saying the California plant also supplied its nuts. Those nuts were sold in 31 states.

According to Jeff Farrar, chief of the Food and Drug Branch of the California Department of Public Health,

“It will be safe to assume based on the volume that this will be an ingredient in a lot of different products, and that may possibly include things like ice cream and cake mixes,” Farrar said. “The firm is already turning around trucks in transit to bring those back to the facility.”

Salmonella, the most common cause of food poisoning, is a bacteria that causes diarrhea, fever and cramping. Roasting nuts is supposed to kill the bacteria, but nuts can be roasted improperly or the product can be re-contaminated. Re-contamination can occur from mice, rats or birds getting into the facility.

Stay away from any product containing pistachios for now. I’ll keep you updated on the news as I get it.