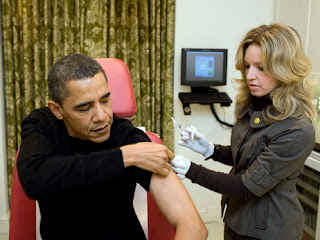 Anybody else thoroughly over hearing about the swine flu? I know you are, but I thought I’d wrap it up (I vow to lay off the story from this point forward) by sharing a chuckle about this completely over-hyped mass hysteria. Reports coming off the news wires have been mixed regarding H1N1 infections; some have them labeled as disastrous, others as no big deal. Let’s check a few out:

On the-worst-thing-since-Typhoid-Mary scene, deaths from swine flu are up everywhere–U.S., India, Israel, California–madness. Many groups are supposedly at increased risk–Native Americans and Eskimos (not kidding), new mothers, children, seniors, and people with chronic lung disorders like asthma and COPD.

However, despite the massive danger to most everyone but people living in plastic bubbles–the public isn’t buying into the hysteria (thank goodness). According to a report last week, the number of Americans getting tested for swine flu has decreased by 75%. Awesome! And the number of tests coming back positive has dropped from 44% in November to only 21% for the two weeks ending Dec. 9. Nice!

So the swine flu epidemic has been more hype than headache. In fact, the actual cases of swine flu reported may be grossly over-exaggerated. Check out this piece by CBS news showing the CDC stopped counting actual swine flu cases individually back in July. Now why would they do that? The piece does a good job of explaining the rationale behind the decision, and if you’ve got a few minutes, check the video below to get an outstanding account of the chronology of the swine flu hysteria. This is CBS News not Natural Health News; just investigative reporting uncovering what I’ve suspected and have written about all along in this blog. Hysteria, that’s all it is.

Nevertheless, our President Barack Obama showed the country he was leading the charge against the swine flu by getting vaccinated yesterday. Bravo! I applaud his taking charge and diving in–’bout time. But I’m certain it’s not necessary, because as I’ve said from day one–flu is flu is flu is flu. But if you want to follow Barry’s lead and get the shot, go ahead, you’ll be fine.