Aw yeh…looks like vitamin D proponents might be right: higher blood concentrations of the sun-vitamin dramatically cut the risk of several major diseases, including breast cancer.  Booyah!  A recent study shows that adults need 4,000-8,000 IU per day to maintain blood levels of vitamin D metabolites in the range needed to reduce by about half the risk of several diseases–breast cancer, colon cancer, multiple sclerosis and type 1 diabetes.

Some in the scientific community had warned of toxicity related to increased levels of vitamin D in the blood, the National Academy of Sciences Institute of Medicine (IOM) even noted there were preliminary signals that there might be some harms associated with consuming high levels of vitamin D daily, even at amounts under the recommended upper safe limit.  But the IOM since last year has deemed 4,000 IU a day safe, a much lower level than the 10,000 IUs they consider to be at the lowest level of potential risk. 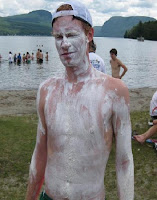 The study looked at several thousand people who took supplements ranging from 1,000 to 10,000 IU per day.  The volunteers also underwent blood tests to determinevitamin D metabolite levels circulating in their blood.  Researchers were surprised by what they found, that the levels required to ward of illnesses like cancer were so much higher than the 400 IU a day needed to vanquish rickets in the 20th century.

Well I, of course, love these results because I’m a BIG proponent of vitamin D supplementation.  Studies have uncovered that many North Americans are deficient in this essential life-giving nutrient.  Chalk it up to our fear of melanoma–thanks dermatologists.  Either way, this study is good evidence that supplementing is safe and effective at warding off chronic illnesses.  Give the body what it needs and it will do what it’s supposed to do.  Guaranteed.