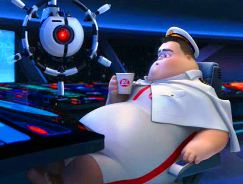 The end is near: Think Captain B. McCrea from the Pixar animated film Wall-e.  Haven’t seen it?  Check the official description from Pixar Wiki:

Captain B. McCrea is a human male who was in command of the Axiom from 2775 to 2805. Like the rest of humanity, he was extremely obese and almost always confined to a hoverchair. Most of the day-to-day management of the ship was handled by Auto and the ship’s computer.

McCrea didn’t need to walk, and apparently now neither do we.  Although Segway has been around since 2002, I have been seeing a lot more of them recently and it has really got me thinking–life does imitate art.  Damn if Pixar didn’t warn us!

OK, I understand the functionality of the Segway PT.  For traffic police or the beat patrol it make sense; even for the military or warehouse workers, who are on the constantly on the move and require efficiency, Segway makes the job easier and that much more productive.  But with every benefit comes disadvantage, yes?  And boy does Segway offer plenty:

And I could go on, but I’d really just be speculating.  I mean, if Segway becomes more embedded into the mainstream, then perhaps people will go to the gym more often…stop laughing…stop…they might.  And perhaps there’ll be No-Segway Zones…like at the mall, where they might only have those airport-style conveyor belts.  People in a rush might get their exercise by walking fast on the left.  Well, if they can squeeze past the McCreas, that is.

I have indeed been seeing more Segway transporters in my neighborhood.  Sometimes, as I look out my office window, I observe able-bodied young men and women Segwaying themselves down the road.  I guess nobody really does walk in L.A.  Maybe we should all carry Segways in the trunks of our cars–for the long haul from parking lot to grocery store.  We’ll see.