Hate to be the One that Tells You, but… 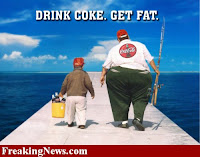 In my recent obesity debates, I noticed a disturbing trend among many proponents of fantastical new theories on obesity, which included some doctors: They were adopting a “obesity is far too complex to blame a singular (or few) product/action” position. As I remarked in an earlier post, I think this poorly thought out opinion only perpetuates the problem.  No less erroneous than the genetic theory of obesity, denying the obvious simply gives the obese person a reason to pull themselves, and their lifestyle habits, out of the equation. As a result, it ensures that obesity will remain a lucrative disease entity in need of a cure (à la cancer).

Case in point: In response to a recent report coming out of the Yale University Rudd Center for Food Policy & Obesity, that has showed soft drink manufacturers to be stepping-up advertising to children and teens, particularly blacks and Hispanics. The American Beverage Association, whose members include soft drink companies, disputed the study’s findings. Said the group’s Chief Executive Officer Susan Neely in a statement, 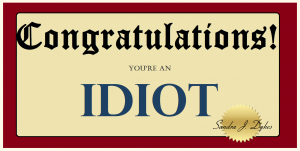 “This report is another attack by known critics in an ongoing attempt to single out one product as the cause of obesity when both common sense and widely accepted science have shown that the reality is far more complicated.”

Uh huh…listen up obesity enablers: Aspects of obesity may have some complexity to them, but how it originates physiologically in the individual isn’t complex. Any right-minded person not driven by profits or ego (doctors…) simply cannot deny that imbibing ten teaspoons of sugar (contents of one can of soda) will lead to metabolic and hormonal changes that ultimately cause obesity.  If you’re this person, forgive me but…you’re an idiot.