Muscle Memory: How to Bring Back the Body You Admire 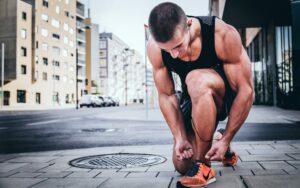 A long-time client of mine recently remarked while speaking about Covid that he, in his late fifties, has lived a good, long life and when it’s his time…it’ll be his time. I found this notion odd because, as a whole, he is a remarkably fit guy. He exercises at least five days per week, eats healthfully and moderately, and has meaningful relationships, a number of enriching hobbies, and a professional purpose which gives some meaning to his life. So I had to think about this idea with regard to lifespan and quality of life as we get older, but particularly with regard to how we view the aging process, what we do with the time we have left remaining, and how to think about our inevitable deaths.

My client’s remark struck me as odd since the average life expectancy for an American male is 78.6 years old. Now let’s think about this for a minute. When talking about the average, or mean value, for a (usually large) number in a set, it is important to remember that we are talking about the value in the center of all other values put together. To put it more simply, the average is in the center of a particular range of numbers and will have nearly equal parts bigger and smaller numbers. Thus, if the average American male lives 78.6 years, that means roughly half of American men will live longer. The law of large numbers guarantees that outliers (like existence a 120-year-old person) will not skew the average. That being said, what does the average life expectancy say about each individual’s potentiality for longevity and quality of life?

The average American is overweight. In fact, according to the Centers for Disease Control and Prevention (CDC), nearly 75% of the U.S. population is overweight. Two in five people (42.4%) in the U.S. are obese. Let’s rephrase that: Take a group of five Americans randomly…four are overweight, two of them are actually obese, and only one is “healthy weight.” Now overweight has some wiggle room; I mean, a body mass index (BMI) of 25 is still overweight. A 6’0” man at 185 lbs. has a BMI of 25.1. A BMI between 18.5 – 24.9 is a healthy weight. So, I would not consider a BMI of 25 problematic. Nonetheless, as you start to push the BMI toward 28-29 (6’0” 210 lbs.), you are just a few pounds short of BMI 30 (obesity). If you want to calculate your BMI, you can do so here:

If the average American is overweight, and almost half the population obese, then any individual who is not overweight or obese has a pretty good chance of living into his or her eighties. And their quality of life will be greatly enhanced. How can I be so sure? Well overweight and obese are at higher risk for Type 2 diabetes, heart disease, stroke, cancer, and death from Covid. In fact, being overweight or obese greatly increases your risk of death overall. The top five causes of death worldwide are: high blood pressure, tobacco use, high blood glucose, physical inactivity, and overweight and obesity. My client’s well-managed weight almost ensures, in the absence of any accidents or violence, that he will live past the average life expectancy. Never stop working at weight management, no matter how many times you slip. Get back up and try again. It is most certainly worth the work.

How about drugs? Well first we have prescription meds – 131 million Americans take at least one prescription medication. In a country with 329.5 million people, that’s 40% of the population that is medicated. In fact, the U.S. is the greatest consumer of drugs around the world. That means that either the U.S. is the sickest nation in the world (could be if looked at clearly; obesity statistics are alarming) or the big business of pharmaceutical sales, replete with white-coated pushers, has found the ultimate market in America. And just to add some spice to these numbers: The U.S. is roughly 20% children (72 million). Pulling children off the total U.S. population number, it means more than half of U.S. adults take at least one prescription medication regularly. Here is the kicker, though: of these people, the average number of medications taken is FOUR! And never forget that ALL medications come with side-effects. The longer one takes a medication (lifestyle drugs) the greater the chance of having one’s physiology affected. Why do you think every doctor asks which meds you’re on? Because medications affect the body, period – no escaping it. The less you take the less your physiology is disrupted. Therefore, my client, who takes one prescription medication regularly, is still at the bottom rung of the mile-high medication ladder. If you, like me, take zero meds, then you have the least amount of medication-disrupted physiology and probably the highest probability of longevity. 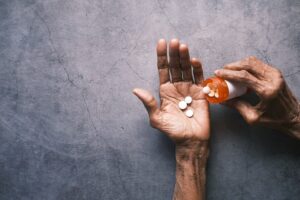 How about the other drugs – the fun ones? Alcohol, tobacco, and other illicit substances. According to the National Center for Drug Abuse Statistics, 165 million Americans aged 12 years or older currently abuse drugs – that is ~60% of the population (Minus kids under 12). Alcohol consumption is the highest at 139.8 million Americans 12 and over (~51%). Next is tobacco at 58.8 million people (~20%). Finally are the illicit drugs (coke, methamphetamine, heroine, and so on) – 31.9 million Americans use them (~12%). Need I go over all the damage caused by drugs and alcohol neurologically, organically, psychologically and in mal-quality of life to chronic users? My client is a rare drinker at most, putting him at an almost zero risk to health and longevity. And if you are a total abstainer, then your potentiality of living a long, healthful life is rather high.

The one area my client seems to skimp on is getting adequate sleep. My understanding is that his sleep is often interrupted (perhaps from the one medication he takes), and I will say that this one negative element actually can be impactful. At the very least, his lack of restful sleep may lead him to question, psychologically, whether he is expressing his best health. When tired, life can seem a little dragging to anyone. It might also lead one to “feel old”, something I hear quite regularly in my West Hollywood chiropractic practice. When people are in physical pain, they do unfortunately feel older. However, when chiropractic helps relieve their pain, their vibrancy increases, and they appear lighter on their feet and in their attitudes. Getting proper rest can have the same effects on a person. Just take that much-needed vacation you’ve been putting off to see this principle in action. Getting sufficient rest is as important as healthy diet, regular exercise and keeping drugs/alcohol to a minimum.

So again, I found it surprising when my client spoke of his life as if he were on his last legs – living in his golden years. A man in his late fifties should be contemplating what his final contributions will be to the world in service and creativity, thinking about his family and estate, and how he will enjoy his next forty years. Thoughts of one’s golden years seem, to me, to be no sooner than in one’s seventies. But I do believe my client’s perspective was being colored by his lack of sleep. This will certainly make anyone feel…older. I do not profess an easy solution to this problem, as the cause of insomnia may be varied and complex. However, in my most simplistic way, I will reiterate that if this is also your problem you really should work on fixing the problem sooner rather than later – your quality of life will improve dramatically as a result. The average life expectancy of an American male is 78.6 years – higher for a female at 78.8 years. But remember, the average American is also overweight/obese, taking 1-4 prescription drugs, and abuses drugs and alcohol. These are the real facts, ugly or not. If very few of these apply to you – or even none! – then you most likely will, in the absence of accident or violence – live long into your eighties, nineties, and for some, hundreds.