Future of Health Care Presently Experienced Not Sick, Not Healthy 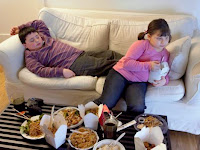 It’s not just American children sitting on their rumps these days–children all over the world are chronically inactive. So says a recent study that looked at over 70,000 teens in 34 nations.

Children from Argentina to Zambia are not getting enough exercise, and are spending three or more hours a day watching TV or playing on computers. Whether a country was rich or poor made no difference to the inactivity of their youth; dismal news on the state of modern culture. No knock on technology, but parents of all nationalities need to limit the amount of boob tube and web surfing their children do, and push them more toward physical activity.

The study, published in The Journal of Pediatrics, looking at 72,845 schoolchildren aged 13 to 15 from North and South America, Asia, Europe, and the Middle East. The children were surveyed between 2003 and 2007. Children that spent three or more hours a day watching TV, playing on computers or chatting with friends–outside of school time or doing homework–were considered sedentary. Only 25% of boys and 15% of girls worldwide were getting enough exercise. Girls were overall less active than boys in every country except Zambia.

Some of the numbers:

Once again, parents would be wise to get the kids kicking, playing and using their bodies. Technology is a great thing; but with every great thing comes a downside, and in this case it’s the risk of becoming couch potatoes. Inactivity and the associated risk of childhood obesity is no longer an American phenomenon–it’s gone global. Time to change.