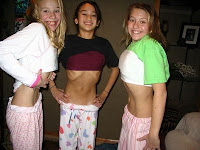 Want to know the flip side to our current obesity obsession?  Increased hospitalization for eating disorders…in children!  That’s right, the more society bashes the overweight, the greater the fear instilled in kids.  Heavens forbid they might turn out to be…big, fat, obese.  Scourges of society they’ll be–the press’ll beat ’em, the public’ll beat ’em, you’ll beat ’em…and forget about what their school mates might do.  Sheesh.