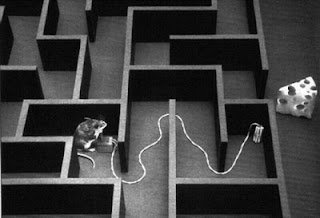 Wow!  My last two posts on ADD/ADHD were right up there with the one on cesareans—let the emotions fly.  Sorry…but here’s some more information I find relevant to the issue.  It’s on latent learning:

Rats were placed into two groups and allowed to gain experience in a maze.  The animals in one group received food when they reached the goal area of the maze; they ran to that area more and more quickly in successive daily trials.  Animals of the other group were allowed to explore the maze for a few daily sessions without receiving any daily reward.  Then, in one session they found food in the goal area.  In the next trial they raced to the goal, reaching it just as rapidly as the rats that had been rewarded on every trial.  If the experimenter hadn’t offered the reward, he would not have realized that the previously unrewarded group had learned the maze as well as the uniformly rewarded rats; until the reward was introduced, the learning was latent, just as an image on a photographic film is latent until the film is developed (Blodgett, 1929; Tollman and Honzik, 1930).

One of the study’s authors (Tollman) proposed that there are different kinds of learning and that each may have its own laws.*  Think about it.