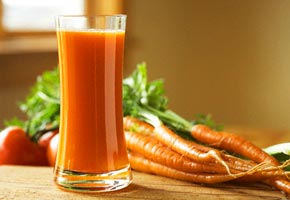 Last year I wrote a couple pieces on nutrition in which I discussed the details around food sensitivities (and here). I have also explained the dietary universals—the aspects of nutrition applicable to all people; not just the nuances so often discussed by proponents of one dietary system over another. And while I do not discount the validity of many of these systems (vegan, raw food, Paleo and so forth), no one system is right for every person. So when I discuss universals, I mean, what you need to survive and thrive as a human being—nutritionally, hydrationally and environmentally (internal).

In this post I am going to discuss a powerful health practice from the context of maintaining and maximizing one of these universals—nutrition. The practice is juicing, and the benefit, in a nutshell, is receiving the maximal amount of nutrients in smallest quantity of food. I will tell you my personal experience with juicing—both as a youth and an adult—what I think is happening physiologically when we consume a high-nutrient food source, and why I think juicing as a practice is such a powerhouse for maintaining and optimizing nutritional health.

I have been juicing, in a sense, since I was a preteen. My mom did the juicing, but I was the recipient of the health benefits during my most formative developmental years. My mom would make many different blends, but carrot juice was always a staple. My teen years had the typical moments of poor food choices, and sometimes far more than I had been used to at a younger age. My mom was convinced that the juice would give me the “necessary nutrients,” and that she could feel at ease about my health, knowing full well how I was challenging it on my own accord. We ate well at home always: With my mom, it was top quality foods all the time—hearty, healthy and full of love. But I was drinking (booze), smoking (everything), and eating junk food on a regular basis, and so she just sensed that it would be the most protective health practice against the lifestyle I was leading.

As I entered adulthood, I would continue to have fresh juice occasionally, usually from a health food store (Erewhon Juice Bar, baby!), which can be expensive, and thus limited…but always when I was with my mom. She always had juicers at her place, multiple kinds at times, and it was simply a staple that she had gotten used to. However, my habit never picked up on its own until just recently.

It is no secret that I have had a number of digestive challenges over the last few years, and as a result, I have had to find the diet that works best for me. Again when I speak of diet, I am not speaking of the fad variety, but of a way of eating. I have already explained the certain food sensitivities I have, so I actually have a limited pool of foods that I can eat from comfortably. For this reason, I must have a way to get the maximal nutrients, otherwise I risk malnutrition. 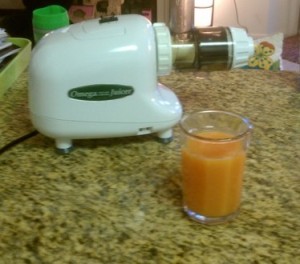 Regular readers of this blog will remember that, three years ago last week, I purchased my first personal juicer—the Omega J8003 Juice Machine. I have been drinking fresh juice 4-6 times per week consistently ever since, and my experiences have been amazing! Because of the big bang of nutrients I get with each juicing, I have had to eat far less than what I’ve needed in the past, which has actually led to significant weight loss. Did I need to lose weight? No! But as a result of this habit, I have morphed into a new ‘healthy weight,’ shape and size…really impressive for a man whose age is considered the typical time of decline by conventional wisdom. But more importantly, my energy levels are at their tip-top, and here is what I think is happening:

As I discuss in my book, The Six Keys to Optimal Health, poor nutrient intake is a very likely factor in overeating, weight gain and obesity. When the body needs nutrients it will do what it knows best: create the hunger response to ensure that more nutrients are brought in. It does not know which foods will actually be consumed, but the Innate Intelligence of the body will always work toward getting what it needs through its physiology, so the hunger response is an obvious tool it has to increase the chances of getting the necessary nutrients. I really started thinking about this concept when I had considered how many times I have eaten pizza in far larger quantities than I normally eat as a whole. I am sure many of you have had a similar experience: Three large slices of pizza consumed, yet three more could easily be put away, while that overfull, but still hungry feeling, persists. C’mon, you’ve done it, or you’ve seen someone else do it. And when it happens you think…how the heck did I just put away that entire large pizza?

Nutrition Education (explains why I could probably eat this whole thing)

I believe it is because the pizza, being high in calories—from dough to cheese to meats—yet low in nutrients (tomato sauce is not an adequate source of calories, nor are the multitudes of vegetables one can put on their pizza, although I am certain the more produce the better) that the body can go through hunger pangs despite the quantity of food consumed being large. And it doesn’t have to be pizza either—it can be any nutrient-poor meal, including some of the ones people regularly prepare at home. But of course this is all purely speculation, and as such I would need more information to solidify my suspicions about this physiological phenomenon.

Once I started juicing, however, I noticed that I needed less food overall. My hunger levels diminished, so that even the portions I consume at my regular (non-juice) meals have decreased significantly. Again, because of my diet, I have a somewhat narrower pool of food items from which to choose, those which my body responds to positively in vibrancy and smooth (functional) digestion. This parameter ends up making me a creature of habit, even more so than my natural tendencies. I am fortunate as well that I only eat when I feel hungry—no snacking or nervous/bored eating for me—which may seem like a no-brainer, but it is habit many people pick up, and consequently have a hard time shaking. So because of my habits of eating only when hungry and choosing from a small group of food items, I pretty much eat the same things every day—same breakfast and same basic lunch. And for dinner…well it’s a pint or two of fresh juice for me.

I only drink two different mixes of juice, which I alternate on successive juicing days. I make a carrot, apple, and ginger concoction, as well as something I call the Citrus Blast—orange, grapefruit and lemon. For my personal physiology—my nuanced physical body—the carrot concoction aids in my digestion, and gives me a quick burst of energy, while the Citrus Blast is a load of energy that might actually keep me up at night if I end up drinking it too late. This burst of energy is not a wiry caffeine-type of energy, but a pure, clean and unmistakable feeling within me. My body thrives on these juices. 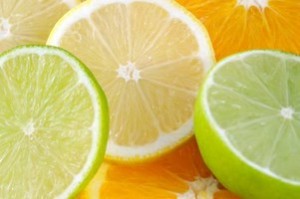 I have noticed that when I am hungry at night a juice will usually satisfy it. Rarely do I require more food. Can you understand what this does for my calorie intake? It has been reduced significantly. So I get this blast of nutrients—vitamins C, A and some Bs from the citrus, while the carrot concoction provides vitamins A, C, K as well as potassium from the carrots, apples and ginger—which seems to be what my body loves, and this keeps me from having to eat larger quantities of food to provide the same amount of nutrients. As it turns out, the calories I receive from breakfast and lunch, along with those provided by the juice, is enough to power me through the night (most often spent doing mental work, which requires a higher carbohydrate load to power the brain. The carbohydrate dominant juice, then, balances the higher protein of my earlier meals).

Just think about what I get from each glass of juice: 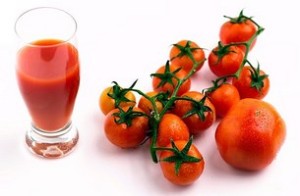 Look at how many fruits I would have to eat for an equivalence of nutrients. Granted, there are other benefits to eating the whole fruit, as proponents of eating whole fruits and vegetables so rightly point out—from fiber to bioflavonoids—but as far as getting optimal nutrients is concerned…well I am sure you can see where the advantage lies.

This is the power of juicing: A blast of nutrients, low calories, and a high propensity for curbing hunger make juicing a super-activity when it comes to nutritional health. Yes some in the health sciences try to refute many nutritional claims, citing lack of evidence as the rationale; and as I said in the beginning of this piece, I can only speculate because truth be told, the studies haven’t been done to answer some of these claims (although plenty of supportive evidence exists to the benefits of good nutrition in health and wellbeing). But I can assert confidently that neither is there evidence showing the harm of certain nutritional practices, and of which I am certain none will be found to implicate the practice of juicing as a detriment to anyone’s health. What this means for you, then, is that the proof is in the pudding. For a few pennies a day (in comparison to meals eaten outside of the home, including juices made at juice bars the cost of juicing at home is nominal), you can prove to yourself the power of juicing. 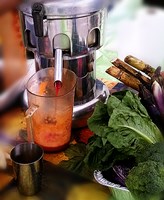 You are not bound by my nuances either—if you can handle greens, by all means, green it up. Berries, bananas, flax seed, you name it—juice whatever you’d like.  Just remember that the produce must be clean and fresh. You cannot be harmed by drinking fresh juices (unless you are diabetic). So for the cost…well, it’s a no-brainer to me: it’s so worth the try. A good juicer will run you about $200 (US). That’s a big fat “Duh!” from a middle-aged fart who has lost weight and increased his energy levels just by juicing.

Getting sufficient (if not optimal) nutrients at the most efficient calorie intake necessary for survival is a metabolic universal. Obviously the activity and lifestyle of the organism will dictate the most efficient levels. But in today’s modern world, where the ever-growing number of conveniences decreases our energy expenditures greatly, we would all benefit from packing the most nutrient-rich punch in the smallest amount of food possible…and for my money it’s fresh juices all the way. Try juicing—you’ll see soon enough.